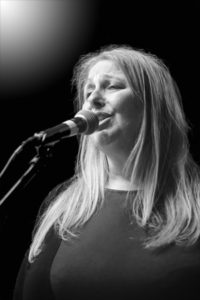 Debbie was involved in music from an early age. Her biggest influence was her Dad, teaching her ukelelee at the age of 5. Debbie performed as part of a young group playing the club circuit across the north west,
winning national talent competitions and appearing on local news and ‘Junior Showtime’.
At 17 Debbie joined the 60’s group ‘The Merseybeats’ doing backing vocals and dancing. She later joined the world famous ‘Ivy Benson All Girl Orchestra’ on Bass guitar working summer seasons and touring Germany for a number of years. Debbie later joined a Mecca band performing all the current chart hits and this is where she met her husband, drummer Steve. They later formed their own band 49th State which successfully played summer seasons in the UK and on cruises during the winter. When the children came along Deb took a back seat from the music.
Always a Steely Dan & Donald Fagan fan, when the opportunity came to join Steely Don she just couldn’t resist.
‘I love being part of Steely Don, great musicians and lovely people’.