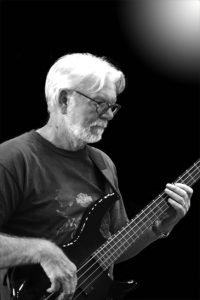 Lee started playing in the mid 60’s. He played the college and university circuit with a 7- piece jazz-rock band supporting some well known bands such as Deep Purple, Black Sabbath and so on. He then played the American military bases in Germany, before going to South Africa in the 70’s for 5-years as a pro bassplayer. Since then he has played in various bands covering several genres including rock, soul and Motown, Latin Jazz and even Country and Western.

Lee is now putting his considerable musical skill and experience into good use as part of Steely Don.

‘These are a great bunch of musicians and it’s been a lot of fun tackling with them the back catalogue of Steely Dan and Donald Fagen; music I’ve been a fan of for decades.’