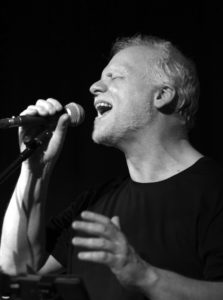 Martin began his musical journey aged nine with piano lessons. He apparently properly fell in love with music after listening to the clarinet intro for The Wombling Song! Following that experience, his attention turned to The Beatles, 10cc, John Miles, Billy Joel, Alan Parson Project and others including of course Steely Dan and Donald Fagen.

Aged fourteen, he formed an A capella harmony quartet with school friends and began gigging. The group soon added instruments and became a ‘proper band’. About this time he began formal vocal training, achieving Grade 8 vocal and Grade 5 piano at seventeen before going on to study Jazz and Popular Music at Leeds College of Music.

Since this time, Martin has performed and toured extensively in pubs, bars, clubs, hotels and ships. His musical travels have taken him from Jazz to Funk via the UK, Ireland, the Middle East and as far as Singapore and Indonesia.

From 1990, Martin continued in the UK to perform on the pubs and clubs circuit as a solo act and also teaches at Oldham Music Centre. He joined Steely Don as the lead vocalist in 2017.

‘Steely Don are an outstanding band and I’m totally enjoying every minute of working and performing with these guys!’