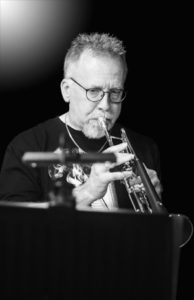 Nigel began playing the cornet at the age of 10yrs. During his teenage years he played with various brass bands in and around the Saddleworth area in Greater Manchester which included the position of principal cornet with Mossley band. Moving on to the trumpet he went on to attend Huddersfield School of Music where he graduated in 1982 and started a teaching career with Lancashire Education Authority. His early career included performing with various orchestras and ensembles including Manchester Camerata and Mozart orchestras and his band Lipservice. Working with musicians across a diverse range of musical styles including classical, rock, pop & reggae, Nigel has performed with Martha Reeves, members of the Drifters and in his younger days with the Liverpool group the Icicle Works.